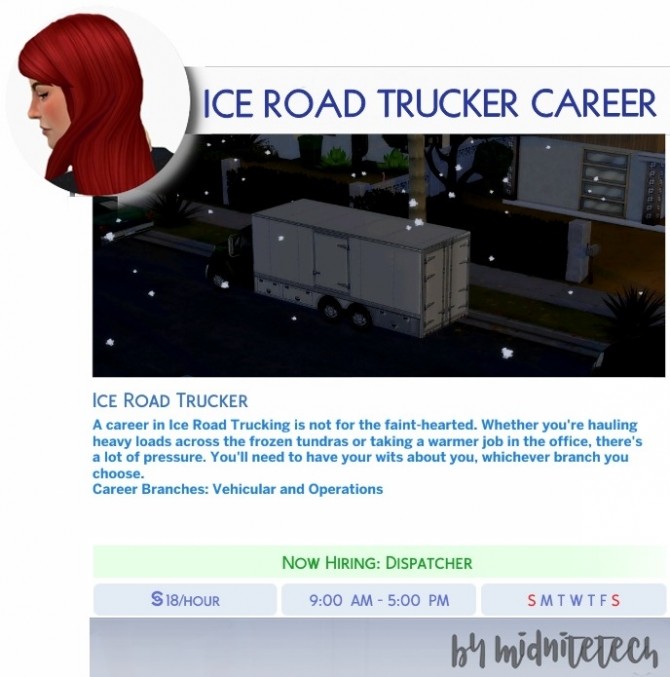 There are 2 branches, each with 7 levels available:

Dispatcher
Working in Dispatch is a great start, and you’ll be handing out jobs for the drivers to complete, from the relative warmth of your office. Whilst you’re waiting for the ICT’s to turn up out of the snow, you can decide on your career path at Polar Industries Ltd.

Tow Truck Driver
As a Tow Truck Driver, you’ll be on call to rescue trucks stuck out in the snow. You’ll need a shovel and a very thick jacket to protect you from the elements as you work out in all weathers.

Plow Driver
Now you’re a Plow Driver, you’re starting to gain a little footing in the trucking world. It’s you that ensures the trucks get out on the roads safely, as you plow away the heavy snow.

Pilot Truck Driver
You’ll be working much more closely with the ICT’s now, as Pilot Driver, you’ll be well in the lead of the big rigs, warning them of other heavy loads approaching from the other direction. Man your CB radio and keep your eyes on the road.

Polar Mechanic
Your Handiness skills are serving you well, and you’ve been promoted to Polar Mechanic. You’ll ensure the trucks are all in tip-top condition, and once you make it to the roads as a trucker, you’ll have the on-the-job skills to keep your big rig in action.

Ice Road Rookie
Sure, the other drivers might tease you and give you a hard time at first, but you’re on the road in control of your very own big rig. You’ll be hauling all kinds of cargo across the frozen lakes, under the supervision of a veteran ICT driver. Did you hear that cracking?

Convoy Driver
You’re proving yourself on the roads, and are now able to drive your own truck, unsupervised. You’ll be in convoy with another more experienced driver, and it’s important to look out for each other on the road.

Ice Road Trucker
You’ve made it! You’re now a well-respected, seasoned veteran of the ice highways. You never miss a shift, and your snow chains are always at the ready! Go forth, Ice Road Trucker, and take on the roads whatever the weather!

Line Driver Supervisor
Your role will be to maintain consistently high standards and reliability across the team of drivers, so it’s all on your shoulders to make sure the team work as a team!

Safety & Compliance Supervisor
Yes, those Health & Safety rules are there for a reason, and it’s up to you to ensure that they’re enforced. No one likes sitting through a boring safety demonstration, but it’s got to be done!

Winter Road Program Manager
Now you’re in control of winter service operations, the safe movement of users on road is up to you. You’ll minimise delays and disruption to users caused by snow or ice.

Truck Push
As the Truck Push, you’ll take responsibility for the truckers’ safety and delivery of their loads. Remember, if you don’t think it’s safe out there, don’t send your trucker out!

Polar Terminal Manager
As Terminal Manager, you’ll hear any grievances raised by your employees and oversee the day-to-day running of the company. You’ll arrange shifts and schedules, and sign off on jobs.

Polar Industries Owner
You’ve made it to the top at Polar Industries Ltd, and are now the Owner. Nothing happens without your say so, and you’re the one truly in charge of everybody. 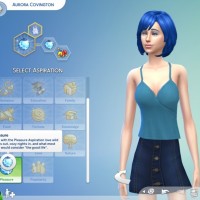 Pleasure Aspiration by NekoMimi at Mod The Sims 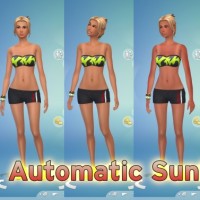 Automatic Sunburns by flerb at Mod The Sims 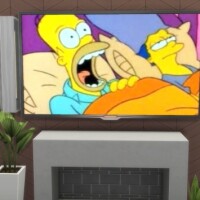 The Simpsons Custom TV Channel by CustomChannelMaker at Mod The Sims 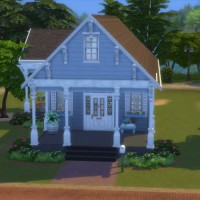 Small Starter Shotgun NO CC by zhepomme at Mod The Sims 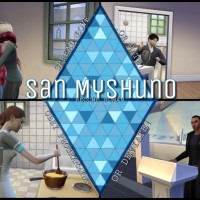 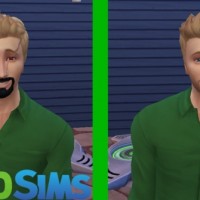